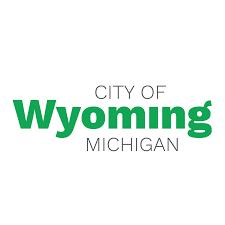 The City of Wyoming is hardly your typical city.  Rather than spreading out from an original point of settlement, this community grew from the outside in.  And today its downtown is a three-and-a-half mile stretch of five-lane 28th Street, one of Michigan’s busiest roadways.

Though commercial establishments are scattered throughout Wyoming today, the greatest concentration is along 28th Street.  Wyoming City Hall is there, too---directly across the busy street from Rogers Plaza, the first shopping mall in Kent County.

Early in its first year as a city, Wyoming officials sifted through contest entries and selected a motto---‘City of Vision and Progress.’  It has proved to be an appropriate choice.  The city appears to have had 20/20 vision and continues to make great progress.

Wyoming’s population continues to grow.  Today, Wyoming is Michigan’s 16th largest community with west Michigan’s third largest industrial tax base.  The City has grown to 72,125 strong with a diverse cultural base, seven school districts, a balance of older and modern homes, retail variety and an abundance of parkland.  All this takes place in a region that is proud, independent, and growing while still competitive.

Email me jobs from City of Wyoming