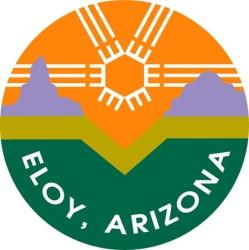 The City of Eloy is a Council-Manager form of local government.   Eloy has an elected mayor and six council members which appoints a city manager who is chief administrative officer of the city. The City provides a wide range of services to its citizens and businesses which address the public’s safety, quality of life and municipal infrastructure.

The city’s planning area has grown to approximately 113  square miles, and there are plans for infrastructure upgrades, downtown revitalization and other economic development projects.

The area surrounding the City began to carry the name of Eloy when in 1902, a siding and section gang house was constructed by the Southern Pacific Railroad and was called ELOY, an acronym for the East Line of Yuma. In January 1918, the Cotton City Land & Development Company purchased land and plotted a town and called it Cotton City. Early settlers recognized that the city was sited in the fertile Santa Cruz River Basin which prompted the cultivation of cotton. An application was made in 1919 to establish a post office at which time the City founders favored the name 'Cotton City'.  However, this name was rejected by the Railroad and Postal Service and the name ‘Eloy’ was selected .

When the City of Eloy officially incorporated in 1949, it was home to approximately 4,700 residents. There are three developed areas of the City- the Downtown area; the Toltec area and Robson Ranch. The City of Eloy is located nearly equi-distant from Phoenix and Tucson and now includes approximately 113 square miles. A population of nearly 18,000 resides in the City-with forecasts to double in the next 10 years. At the heart of the Arizona Sun Corridor, Eloy has the opportunity to serve as the vortex of manufacturing and major distribution firms located along Interstate 10 and Interstate 8. Other key transportation assets are the Union Pacific Railroad and Eloy Municipal Airport.  Open space and trails also surround the City, including Picacho Peak State Park, Picacho Reservoir, Ironwood Forest National Monument, the Casa Grande Natural Resource and Trail Park, and Casa Grande Ruins National Park.

Email me jobs from City of Eloy