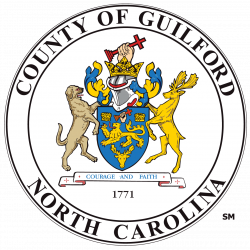 Founded in 1771, Guilford County is the third-most populous county in North Carolina. Guilford County was named after Francis North, the first Earl of Guilford, and was formed from parts of Rowan and Orange Counties to centralize government and Courts of Guilford. The Guilford Courthouse became the location of General Nathanial Greene and Lord Cornwallis’ famous battle that was a turning point in the war and is still reenacted today.  Guilford County, part of the beautiful Piedmont Triad area of north-central North Carolina, includes the cities of Greensboro and High Point, as well as several towns and smaller communities. The County historically served as one of the major manufacturing and transportation hubs of the Southeast, most notably for textiles and furniture, and to this day has the largest furnishings trade show in the world, the High Point Furniture Market.

With a rich history of anti-slavery activism, Guilford County is a stop on the historic Underground Railroad, a nationally known landmark within the civil rights movement. Abolitionist Levi Coffin noted Guilford College Woods (historically called New Garden Woods) as a place of refuge for the Underground Railroad, now a protected area. Additionally, historic segregation protests in 1960 happened at the then white-only lunch counter at the Woolworth store in downtown Greensboro. Helping to fuel similar efforts across the nation, the former Woolworth store location is now the site of the International Civil Rights Center and Museum.

The County is presently home to historical sites and institutions, as well as the host of notable recreational and cultural events such as the John Coltrane International Jazz and Blues Festival, the North Carolina Folk Festival, the Wyndham Championship Golf Tournament, the Greensboro Grasshoppers and High Point Rockers baseball teams, and a variety of collegiate events.  The public enjoys multiple regional parks within Guilford County, as well as opportunities for camping, fishing, golfing, and other outdoor recreation activities.

Cities and towns in Guilford are noted among the top U.S. cities for a low cost of living, almost 10% below the national average. These areas boast friendly, walkable neighborhoods, vibrant social scenes, plenty of cultural attractions, and a central location perfect for enjoying the abundant opportunities for outdoor recreation. A three-hour drive east brings you to the beautiful North Carolina coast, while a three-hour drive west places you on Mount Mitchell in the magnificent North Carolina mountains, the highest point east of the Mississippi River.

All demographic information was sourced from the U.S. Census Bureau.